Alpha-GPC, also known as Alpha-glycerophosphocholine (aGPC), is a choline-containing phospholipid isolated from soy.

In the world of PEDs, research chemicals, and anti-aging medicine, Alpha-GPC is perhaps the most well-known and widely used nootropic (apart from Phenibut HCL).

This is an incredible cognitive enhancer that can improve memory, focus, and alertness. Besides providing you with benefits similar to the limitless pill (NZT pill in Limitless movie), Alpha-GPC can also bring physical performance to the next level by improving isometric strength and increasing growth hormone levels.

Click on the link below to buy our recommended ALPHA-GPC and save 10% OFF with code ENHANCED10 at checkout!
BUY ALPHA-GPC HERE 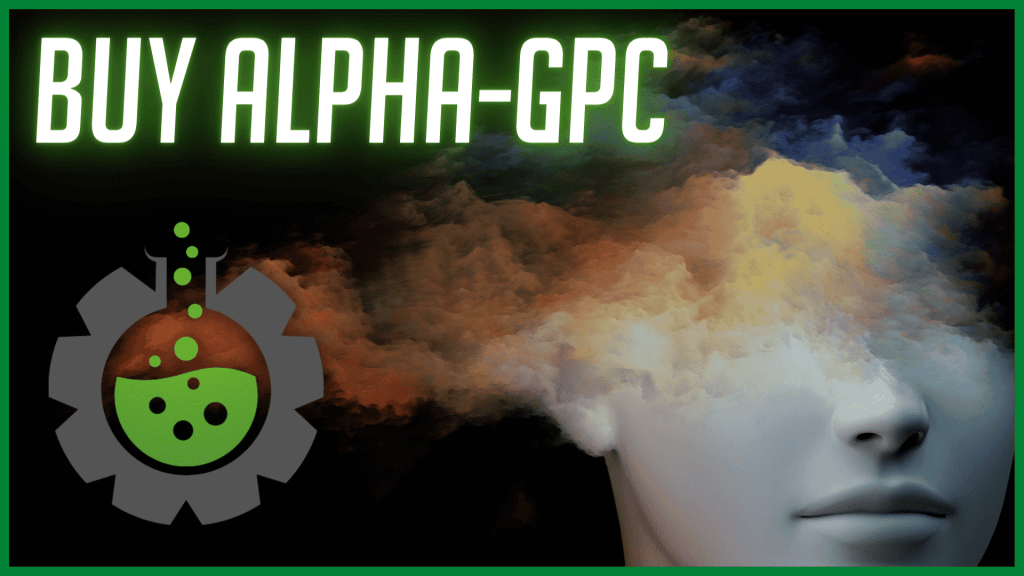 Click on the link below to buy our recommended ALPHA-GPC and save 10% OFF with code ENHANCED10 at checkout!
BUY ALPHA-GPC HERE

Alpha-GPC is backed by the pharmaceutical company Douglas Laboratories.

Literature can be found going all the way back to 1991, when pre-clinical studies were researching it’s effects on Alzheimer’s [R].

Since then, a range of studies from fighting diseases to improving athletic performance have been conducted but the FDA has not declared it’s use for anything specific, rather, a general safe dose has only been recognized.

We’ll take a dive into the benefits, side-effects, and dosing protocol of Alpha-GPC and allow you to make the informed decision if it’s right for your research and where you can apply it!

HOW TO BUY ALPHA-GPC

You can find high-quality, 3rd-party purity-tested Swiss Chems Alpha-GPC by clicking in the link below. Use code ENHANCED10 to save 10%!

HOW DOES ALPHA-GPC WORK?

Alpha-GPC is a choline compound in the brain. It is a biosynthetic precursor of acetylcholine that can pass the blood-brain barrier to deliver choline.

Once choline is increased, it upregulates acetylcholine which from here, provides a slew of benefits including improved memory, focus, clarity, growth hormone increase, and isometric strength increase [R, R].

From a manufacturing standpoint, Alpha-GPC is produced mainly from soya phospholipids and soy lecithin.

ALPHA-GPC PROS & CONS IN A NUTSHELL 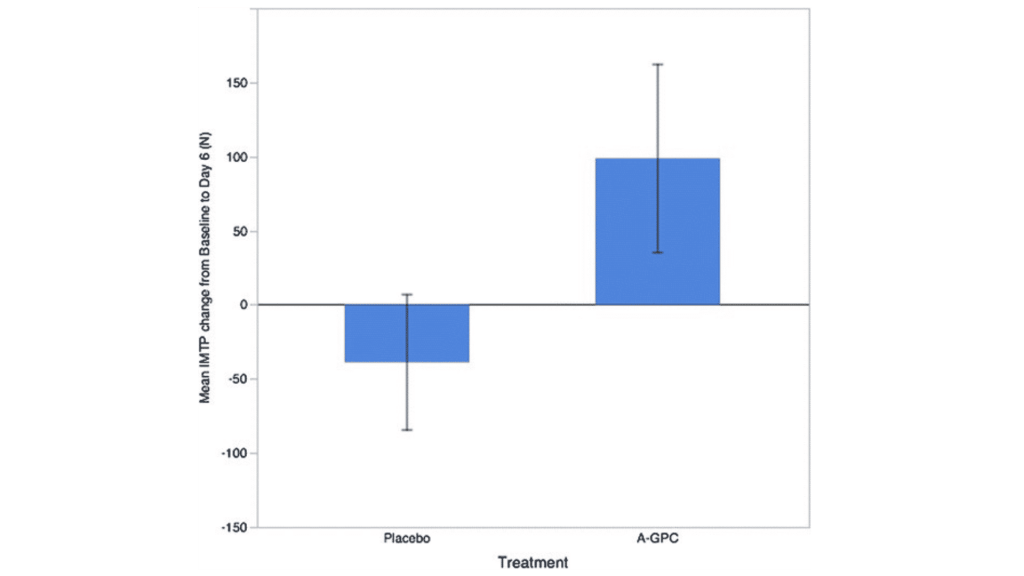 While clinical research on humans has been done with Alpha-GPC, the benefits and side-effects we’ve compiled from thousands of users from our community have allowed us to reassure much of what the literature suggests and compile side-effects that literature has not reported.

By no means does this exempt one from consulting with a doctor but empirical evidence is just as important as clinical (after all, you and your friends are the ones taking it)

Reports from users and studies done in the 90’s have shown an increase in memory performance, focus,  and alertness [R, R].
By increasing acetylcholine levels in the brain, these benefits of Alpha-GPC should manifest themselves since acetylcholine is a neurotransmitter that helps carry out basic memory and learning functions. Studies performed have shown mental speed increases, verbal memory improvement, verbal learning improvement, and executive function improvement [R, R].

Through acetylcholine-stimulated catecholamine, research shows an increase in growth hormone levels which inherently increases protein synthesis and fat oxidation [R].
Growth hormone is essential for the repair of tissue and cellular regeneration. At a dose of 1000mg/day in the study and from users who have reported taking Alpha-GPC, we can confirm a positive effect on physical performance can be seen with adding Alpha-GPC to your regimen.

Among the possibility of inheriting more muscle tissue is also improving strength. Alpha-GPC supplementation at a dose of 600mg/day was reviewed to improve isometric strength by 86.5% [R].
Adding Alpha-GPC standalone or with other things shows it can vastly improve physical performance.
BUY ALPHA-GPC HERE!

Like most things in life, these benefits come at a possible cost. Fortunately, Alpha-GPC is practically without side-effects and the side-effects are non-serious.

Always consult a physician before taking anything with the below side-effects, especially if you have a history of high blood pressure or you’re pregnant/nursing.

Nootropic users from our community and reddit who constantly use Alpha GPC have reported experiencing headaches. Headaches are common side-effects Alpha-GPC since it tends to produce excess choline in the brain.

Alpha GPC headaches may be transitory and could last for hours. Using Alpha GPC nootropics could aggravate migraines or headaches induced by other stimuli.

Nootropics like Alpha GPC are responsible for the activation of the acetylcholine receptors in your brain. However, some clinical studies show how the overdose of this supplement might put excessive strain on the cholinergic system leading to migraines and headaches [R].

Many users, for example, have felt tired and began to suffer from chronic fatigue. Some people will feel sleepy and not want to get out of bed in the morning or have difficulty staying awake.

While this is more commonly a side-effect of low acetylcholine levels, many users have felt this lethargy but we deduce it to be exercise-induced fatigue.

Studies show an increase in acetylcholine can lead to ACh signaling, causing symptoms related to anxiety and depression [R].

This side-effect has also ended up being a benefit we’ve seen–and we don’t mean anxiety is a benefit. Some users have reported a sudden increase in anxiety once their administration of Alpha-GPC began, however, some users who already had anxiety reported their symptoms were either reduced or gone.

While it’s a little unclear, increases in acetylcholine may cause a cholergenic action, stimulation of the gut chemoreceptors and stretch receptors that triggers nausea and vomiting via vagal nerve afferents and afferent fibers associated with the sympathetic nervous system [R].
Alpha-GPC causing nausea, vomiting, or diarrhea has been very rare among users who’ve taken Alpha-GPC daily for a while.

Bodybuilders, students, and biohackers use anywhere from 500mg to 1500mg a day of Alpha-GPC but the minimum effective dose that most users have found for cognitive and physical performance enhancement is 1000mg a day. 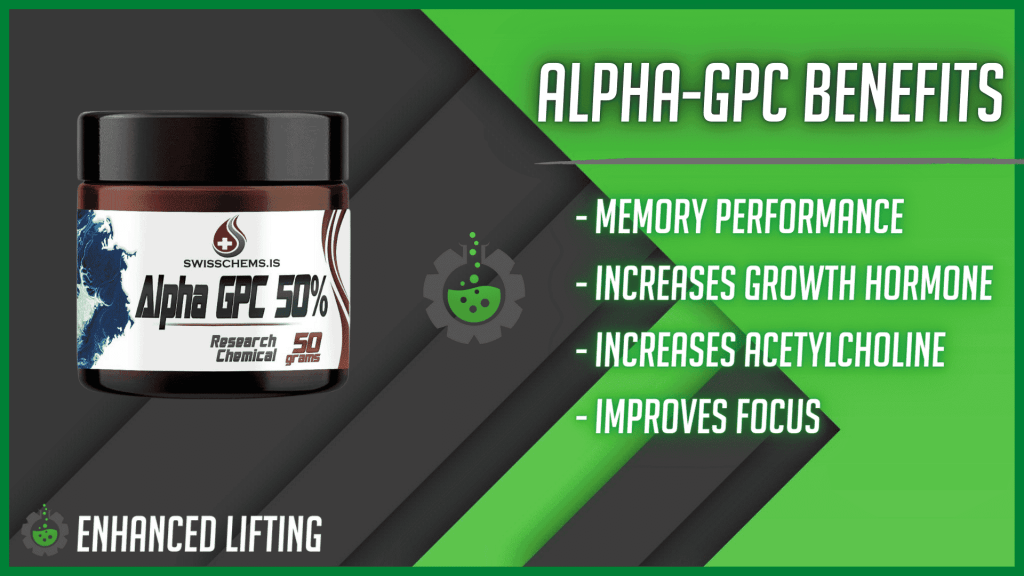 In short, we could say that Alpha-GPC is an incredible cognitive enhancer that can improve memory, focus, alertness, increase growth hormone levels, and increase isometric strength. It is an excellent nootropics by itself, taken with others like Oxiracetam, or even stacking with research chemicals like MK-677 to further increase GH.

This is an excellent option for those wanting to enhance memory before an exam, reach a new PR, or during their SARM or AAS cycle as a cycle support to improve size and recovery.
Take Alpha-GPC once per day at 1000mg.

WHERE TO BUY ALPHA-GPC

If you’ve decided to research with Alpha-GPC and want to find the best Alpha-GPC for sale, choosing a reliable company to buy from is crucial, since buying it from a bad company could result in you getting no results or getting horrible side-effects due to being sold something that’s not actually Alpha-GPC.

For Alpha-GPC in powder form, We recommend going with Swiss Chems.

Swiss Chems is one of our favorite vendors for getting pharmaceutical-grade nootropics. They have Alpha-GPC, Phenibut HCL, Kratom, and more for sale online.

You can buy Alpha-GPC from them through the link below and use code ENHANCED10 to save 10% off your order.

How much Alpha-GPC to take?

This can depend but typically between 600mg and 1000mg.

CDP Choline is an intermediate in the generation of phosphatidylcholine from choline. This means it technically uses similar mechanism of action as Alpha-GPC to increase acetylcholine levels in the brain, theoretically providing similar benefits.

How do I take Alpha-GPC?

If you buy from a vendor who sells in liquid form, it's much easier to administer since most glass pipettes come marked in milliliters.