The best Post-Cycle Therapy (PCT) for SARMs has EVERYTHING to do with a class of drugs called SERMs.  In SERMs 101, we taught you what a SERM is, how to use it for SARMs, what is the best PCT for SARMs, and lastly, where to buy SERMs for your SARMs post cycle.

If you need to brush up on the terms above, feel free to navigate to SERMs 101 and SARMs 101 before we dive deep into one of the best SARM PCT products on the market: Clomid (Clomiphene).

If you’re just skimming, and looking for the #1 SARMs website to purchase PCTs from, we highly recommend Amino Asylum. Their high-quality products are second to none, and their shipping is ALWAYS on time.

Enclomiphene is a SERM (Selective Estrogen Receptor Modulator) that was developed from the Clomid (Clomiphene) molecule for the treatment of hypogonadism in men. Hypogonadism is a condition whereby the Hypothalamus-Pituitary-Gonadal axis is unable to produce sufficient androgens (such as Testosterone) for a man to feel good.

Enclomiphene is used by bodybuilders to restore their natural Testosterone levels and fertility after running a cycle of SARMs or Anabolic Androgenic Steroids. It is also used to reverse testicular atrophy and improve sex drive, sexual function, mood and energy levels by natural bodybuilders who struggle with low Testosterone.

In this article, you will learn everything you need to know about Enclomiphene and how to use it in a bodybuilding context for PCT after SARM and Steroid cycles.

As mentioned before, Enclomiphene has a lot in common with Clomid (Clomiphene).

In fact, many people confuse the two and think that they are the same thing, and while they do in fact share many properties, being able to differentiate them from one another is key.

The beautiful thing about taking pure Enclomiphene instead of regular Clomid (Clomiphene) is that we are only using the pro-androgenic isomer, meaning that we get all the Testosterone-boosting benefits of Clomid without any of the estrogenic side-effects it is known for.

IS ENCLOMIPHENE A SAFE PCT?

Enclomiphene is not FDA-approved and it is not backed by as much scientific research as Clomid (Clomiphene) and other SERMs like Tamoxifen (Nolvadex) are.

Despite this, we can deduce that Enclomiphene is pretty safe and well-tolerated because it is part of Clomid, which has been studied extensively and is generally regarded as a safe medication. The countless anecdotal reports from bodybuilders who have used Enclomiphene for PCT also seem to indicate that this SERM is a safe and reliable option if used properly.

Keep reading to find out what the benefits of Enclomiphene PCT are, and what side-effects you can expect from it! 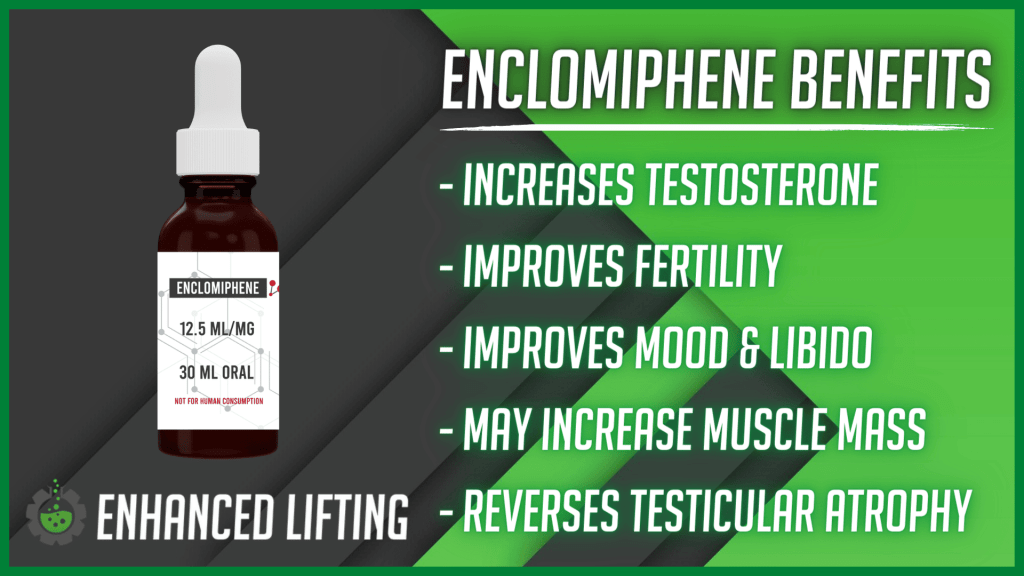 Enclomiphene is the only SERM that is being seriously studied as a treatment for hypogonadism. It is extremely effective at boosting Testosterone levels, and more and more anecdotal data is coming out proving that it is an excellent PCT option as well as an excellent test base for SARM cycles.

It is also extremely effective at increasing fertility and sperm count, and you can expect it to reverse testicular atrophy after a cycle.

While it is not as effective as Tamoxifen for gynecomastia control, Clomid (Clomiphene) is still somewhat effective at preventing and reversing it in its early stages according to clinical trials.

There is no scientific or anecdotal information about Enclomiphene and its effects on gynecomastia, but if Clomiphene has mild anti-gyno properties, it is safe to assume that Enclomiphene does too.

After all, Clomiphene is 62% Enclomiphene and 38% Zuclomiphene. The former is pro-androgenic and the latter is estrogenic, so we can easily conclude that Clomiphene’s anti-gyno properties are derived from Enclomiphene.

Despite this, we have seen reports of guys whose nipples got puffy on Enclomiphene. This does not necessarily mean it causes gynecomastia, since many factors can modulate the volume and shape of the nipples.

Given that all SERMs can increase Testosterone levels, you would expect all of them to increase sex drive and improve one’s mood. The reality is that most SERMs will either have a neutral or sometimes negative on both mood and libido, and Enclomiphene PCT is the only exception.

There is no scientific evidence to prove that Enclomiphene can directly cause muscle growth, but it can increase Testosterone so much that we believe it can help with gaining muscle (despite the IGF-1 drop).

The same could be said about other SERMs, but they are not as powerful as Enclomiphene so I would not expect the same results.

According to anecdotal reports, Enclomiphene can cause something similar to what is commonly known as “Roid Rage”. Users report feeling more masculine, aggressive and impatient.

There is no scientific or anecdotal information indicating that Enclomiphene could be hepatotoxic but seeing how most SERMs can have a small impact on liver enzymes, it is safe to assume that Enclomiphene is no exception, especially if we consider that it is significantly stronger than its counterparts.

That being said, we have only received a couple of reports from people who got this side-effect on Enclomiphene, and they absued it for more than 12 weeks at a time, which is completely unnecessary to conduct a good PCT.

HOW DOES ENCLOMIPHENE PCT WORK?

Enclomiphene works by selectively blocking estrogen receptors in the hypothalamus.

Blocking ERs in the hypothalamus allows Enclomiphene to trick the brain into thinking that there is no estrogen in the body, causing it to stimulate testosterone production.

Even though all SERMs have the same mechanism of action, their effects differ slightly, making some more suitable for the treatment of gynecomastia, and others more effective at restoring / boosting testosterone production.

Not all SARMs require an Enclomiphene PCT.

The only reliable way of determining whether a SARM needs a PCT or not is to get a blood test. If a blood test just isn’t in the cards for your research, it’s best to err on the side of caution and match the appropriate SERM with your SARM/AAS cycle.

The most common and our most recommended PCT consist of Clomid. In circumstances where the cycle can be very suppressive, we recommend a double-PCT approach of Enclomiphene (or Clomiphene) and Tamoxifen PCT.

Some factors that affect these decisions could include type of SARM/AAS, dosage, cycle length, and genetic predispositions. We go into greater detail in our PCT for SARMs article.

WHERE TO BUY ENCLOMIPHENE

Now that we’ve reviewed the best SARM PCT on the market in 2022, let’s explore the best SARM websites, and we’ll tell you who we think the best companies are in 2022.

All of the vendors on this list have been carefully picked by our team, and every one of them assures high-purity active ingredients, moneyback guarantees, and touts high customer reviews.

While we can’t say one or the other has better Enclomiphene, we will divide them into North American suppliers and UK/European suppliers so you can find one close to you.

WHERE TO BUY ENCLOMIPHENE IN THE USA & CANADA

Getting an Enclomiphene PCT from a high quality SARMs website is crucial.

Not all of these SARMs websites sell PCTs like Enclomiphene, especially in liquid form.

One of the reasons we really like Amino Asylum so much is because they have such a wide range of PCT products for sale. They carry Tamoxifen, Clomiphene, Raloxifene, & Enclomiphene all in liquid form!

Amino Asylum is definitely one of the newer SARMs and research chemical companies on the block but they’re very quickly starting to build up a good reputation for their company, due to many customers giving raving reviews for their products.

In addition to this, if you use the code ENHANCED20 when purchasing, you’ll save 20% off your Enclomiphene, and anything else you want to buy.

BUY ENCLOMIPHENE IN THE USA HERE!

Just one bottle of each will last the entire 4-week length for your SARMs post cycle therapy.

WHERE TO BUY ENCLOMIPHENE IN THE UK & EU

Camochem is one of the best SARMs companies in the UK and Europe due to their product purity, great customer support, and competitive prices. They’ve got some of the best research chemicals and SARM capsules on the market right now.

Here’s why we love Camochem:

We asked for a coupon code to give you guys—use the code ENHANCED20 for 20% off. This will apply to any of the SARMs, PCTs, or peptides that they’re selling on their site. 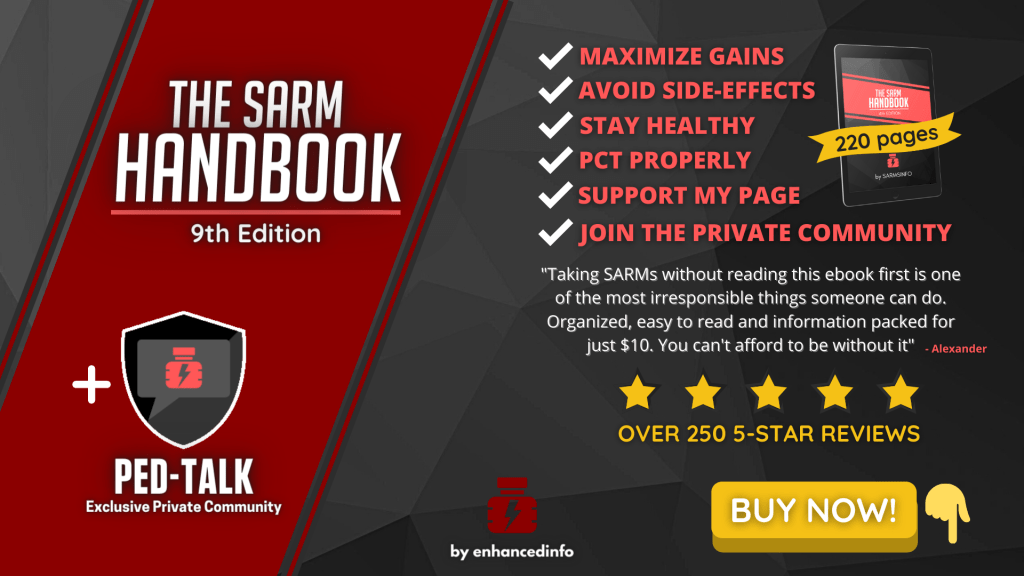 For more information, check out THE SARM HANDBOOK we’ve written to give you everything you need to know in order to use SERMs & other Research Chemicals in the most effective and safest way possible.

Think of it like your personal cheat sheet for any cycle you have planned to know exactly each chemical you need from the start, during, and after your cycle.

With nearly 300 reviews and over 7000 copies sold, this should be a no brainer when it costs the same as a McDonald’s run.