If you’re just skimming, and looking for the best website to purchase PT 141 from, we highly recommend AMINO ASYLUM. Their high-quality products are second to none, and their shipping is ALWAYS on time.

PT-141, also known as Bremelanotide and Vyleesi, is a synthetic analogue of a naturally occurring peptide hormone known as α-MSH.

PT-141 is essentially a metabolite of Melanotan II that provides the sexual enhancement benefits of its parent peptide without an increase in melanogenesis, meaning that it does not help with getting a tan.

Keep reading to find out how PT-141 works, what to expect from it in terms of benefits and side-effects, and how to use it for best results as a libido enhanced for both men and women! 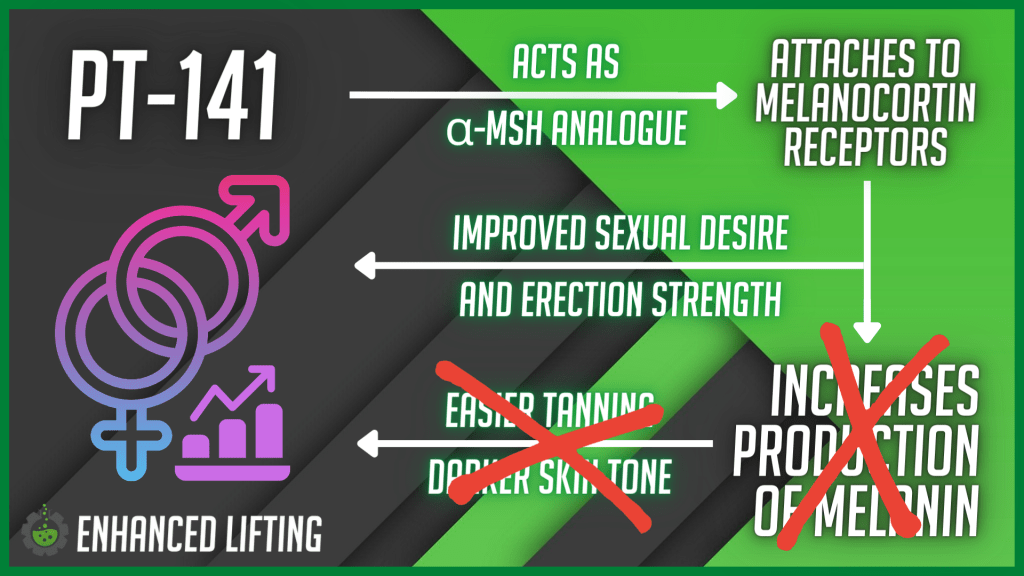 PT-141 (Bremenalotide) is a metabolite of Melanotan II, so they have a similar mechanism of action.

Like MT II, PT-141 is an analogue of the alpha-Melanocyte-Stimulating-Hormone, meaning that it also attaches to Melanocortin receptors.

PT-141, however, is more selective than Melanotan II, and only attaches to the Melanocortin receptors involved in sex drive and sexual function. Therefore, it does not increase melanin production, and it does not facilitate getting a tan.

As you know if you have read our article about Melanotan II, the parent peptide of PT-141 can also improve fat loss rates, decrease inflammation in the brain and increase insulin sensitivity by decreasing blood sugar levels. It is unclear whether PT-141 can also provide these benefits. 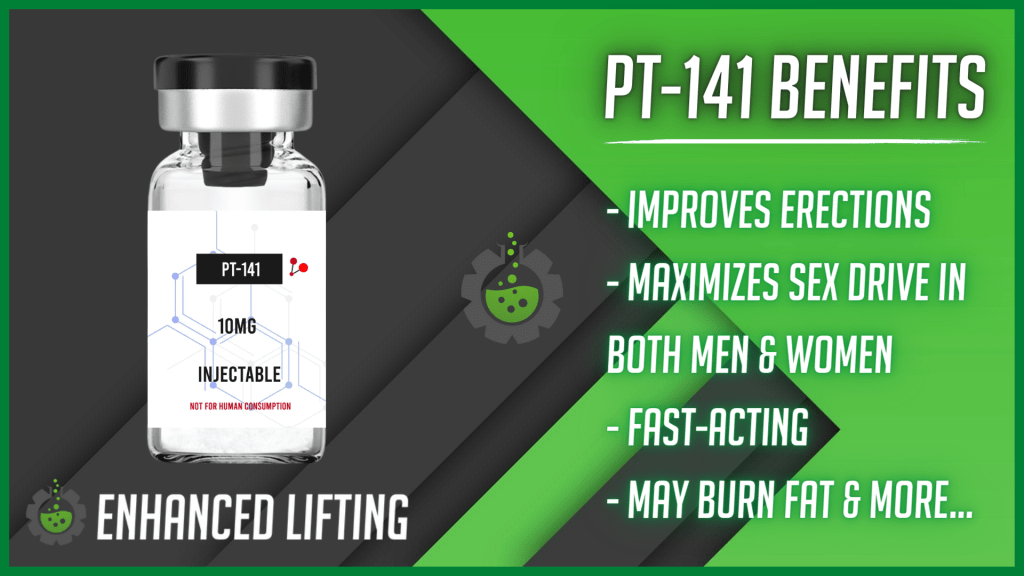 The data on this is clear: As proven by multiple clinical trials, Bremelanotide (PT-141) can safely and effectively increase sexual desire in women, including those who are postmenopausal.
Improvements in sexual satisfaction and orgasms were also common among the participants in the studies.
Anecdotal data from women who have used this peptide confirms these findings, with many of them reporting a renewed interest in their sex life and their partner.
Needless to say, this is a great tool for re-animating a “dead bedroom”, and many men ask their significant other to use it for that purpose.

The effects of PT-141 on men have not been studied as extensively as in women, but the data also shows a significant improvement in erectile function. In fact, it was shown to be effective at improving erections in men who do not respond to PDE5 inhibitors like Viagra.
Despite being developed as a treatment for women, there is a lot more anecdotal data from men than there is from women. Most men report that unlike Viagra or Cialis, PT-141 causes erections that are hard to manage because they often occur in the absence of sexual stimulation.
The half-life of this peptide is short and it is almost always used strategically before sex, so you should not worry about having spontaneous erections in public.
Many men also report increased sexual desire, often in the form of craving new or existing fetishes.
BUY PURE PT-141 HERE!

Given that PT-141 is like a “sex-only” version of Melanotan II, it has a lot less side-effects. The fact that it has been approved by the FDA for the treatment of low libido in women proves that this is a relatively safe and highly effective peptide.

Side-effects like nausea and headaches were fairly common in clinical trials, and they are often reported anecdotally as well. The easiest way to prevent (or at least mitigate) this side-effect is to work your way up from a very tiny dose. Facial flushing is also common, but it only lasts for a few minutes.

Bremelanotide is easy to use. You can opt for intranasal sprays or injections, both administration methods are highly effective, but the injections require a smaller dose, so they are more cost-effective.

(Click here to learn how to reconsitute and inject peptides like PT-141 if you don’t know yet!).

Inject 250mcg subcutaneously into your lower belly fat, 30-45 minutes before having sexual intercourse. There is no need to cycle this peptide, you can simply use it whenever you need it.

If you tolerate 250mcg well, you can increase the dose up to 500mcg per use. If you choose to use it intranasally, follow the same instructions but with twice the dose.

The same dose applies to men and women.

PT-141 should be stored in the fridge after reconstitution (you can learn how to reconstitute PT-141 or any other peptide here!). 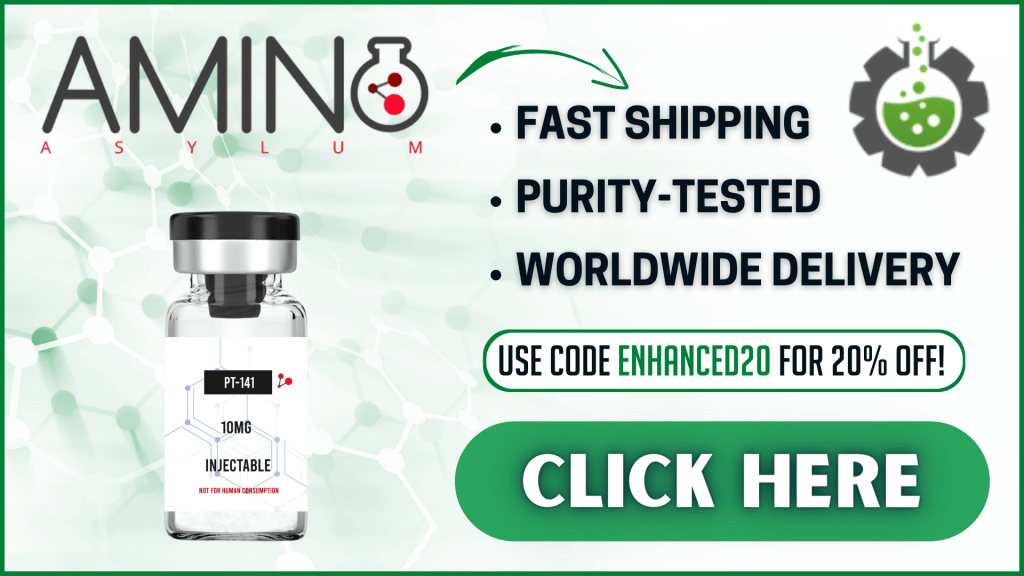 Getting high-purity PT-141 for sale online is crucial for your research.

One of our favorite vendors to buy PT-141 from is Amino Asylum, they have BPC-157, TB-500, Ipamorelin, and more peptides and SARMs for sale online.

Even further, they also have BAC water for sale which is crucial for reconstituting and storing your peptides properly.

In addition to this, if you use the code “ENHANCED20” when purchasing, you’ll save 20% off your PT-141, Melanotan II, BAC Water and anything else you want to buy.

In conclusion, peptides are a fascinating class of research chemicals, which when used responsibly, can yield massive muscle gains, sexual performance, and fat loss.

If you use the discount code “ENHANCED20” you will get 20% off, so don’t forget to apply it at checkout! 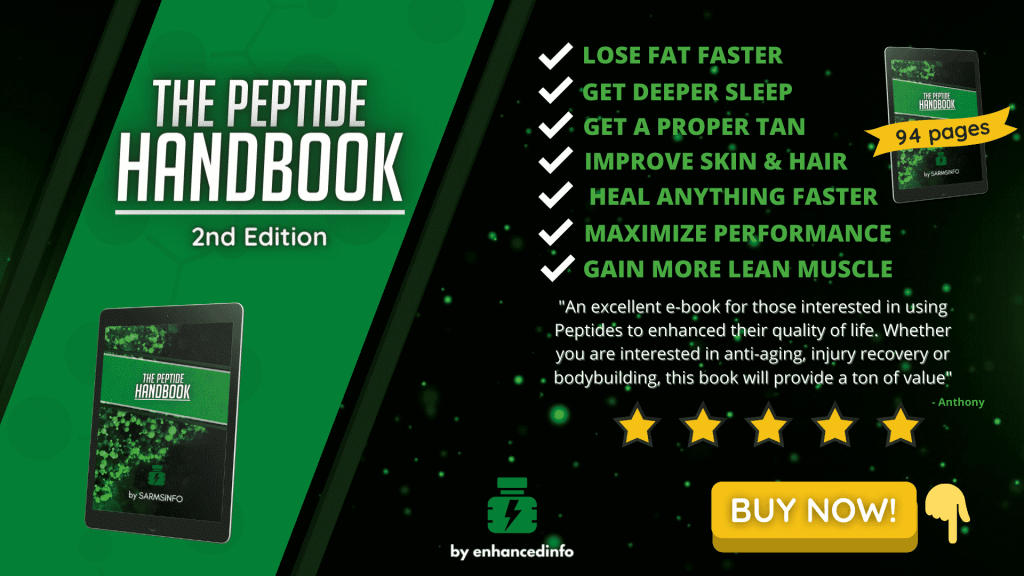 This Peptides 101 article provides a very general overview of what peptides are.

Keep in mind that every user is different, and there is a good chance that your experience with these compounds won’t necessarily reflect all of these pros & cons. If you want an in-depth analysis of all these peptides as well as instructions on how to cycle, dose, and stack them properly, read our Peptide Handbook by clicking here!

Think of it like your personal cheat sheet for any cycle you have planned–don’t miss this.