Suffering from hair loss is one of the biggest fears a PED user has. In this full hair loss guide on RU-58841, we’ll dive into SARMs side-effects (and AAS) like hair loss so that you can see what RU-58841 results to expect and further prevent this nasty androgenic side-effect.

If you’re just skimming, and looking for the #1 SARMs website to purchase RU-58841 from, we highly recommend Chemyo. Their high-quality products are second to none, and their shipping is ALWAYS on time. 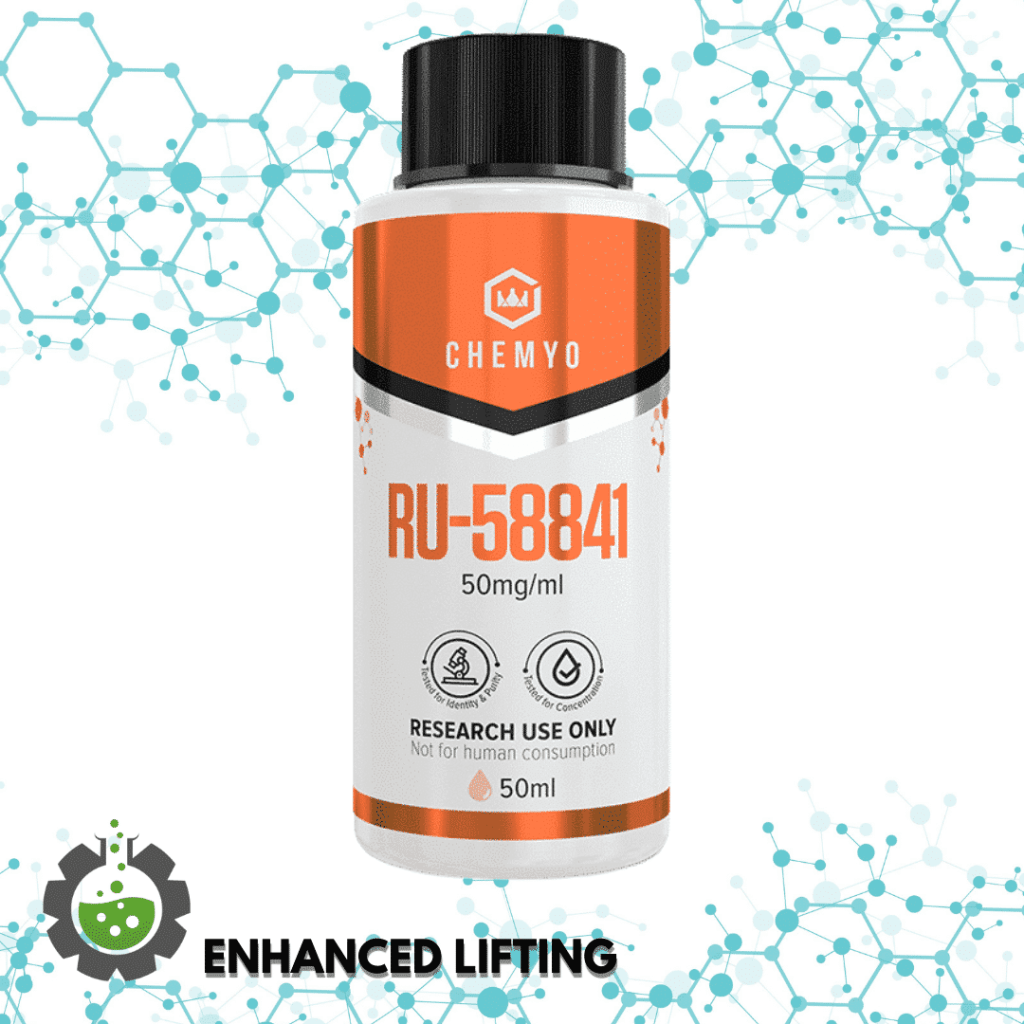 RU-58841, sometimes spelled PSK-3841, HMR-3841 or RU 58841, or RU58841,  is an experimental, topical, nonsteroidal antiandrogen (NSAA) that is applied topically to the scalp, where it blocks the androgen receptors to prevent DHT from attaching to them and causing hair loss.

A lot of men, particularly bodybuilders, are taking their hair loss into their own hands regardless of the lack of clinical movement.

One of the results that we’ll show you even blew us away.

It was under investigation as a protentional hair loss treatment as well as acne.

Clinical research seems to have ceased since 2014.

Since RU-58841 is classified as a research chemical, you’re easily able to buy it online.

RU-58841 is still not approved by the FDA for any treatments.

You can find high-quality, 3rd-party purity-tested RU-58841 solution by clicking in the link below. Use code ENH10 to save 10%! 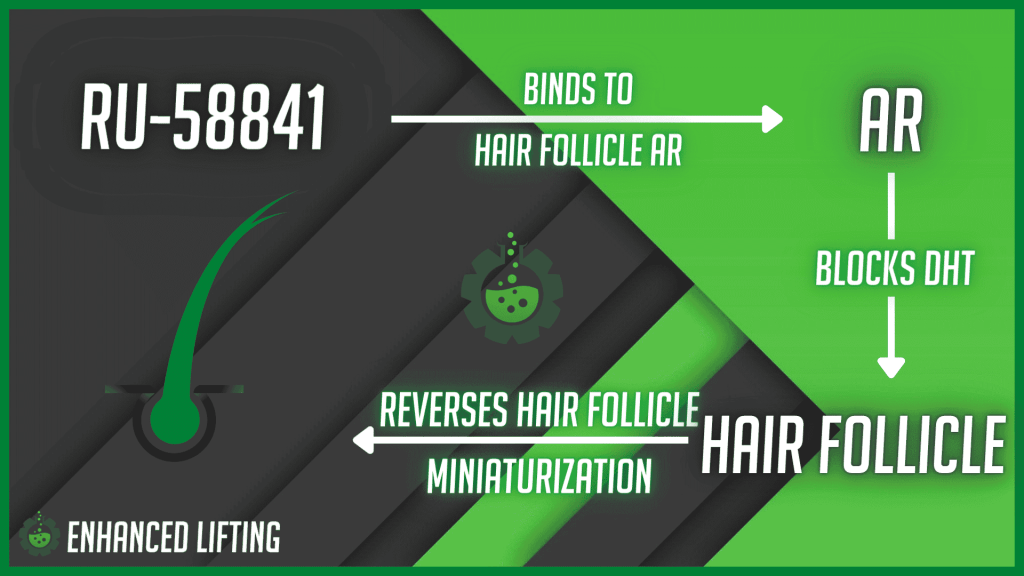 RU-58841 works by blocking the effect of androgens like Testosterone and DHT.

Hair loss is an androgenic effect commonly caused by androgenic compounds like SARMs or Steroids (AAS). By simply binding to the local androgen receptor (AR) of the hair follicle, RU-58841 prevents damage done from Tesosterone or DHT derivatives to stimulate hair follicle growth.

RU-58841 has many benefits comparative to its DHT Inhibitor counterparts. A big downside of DHT inhibitors like Finasteride is that they can crash DHT levels if abused. DHT may cause hair loss, but it’s also needed for optimal mood, well-being, and sexual function in men.

We’ll go through some of the benefits we’ve listed previously and clinical research behind them. 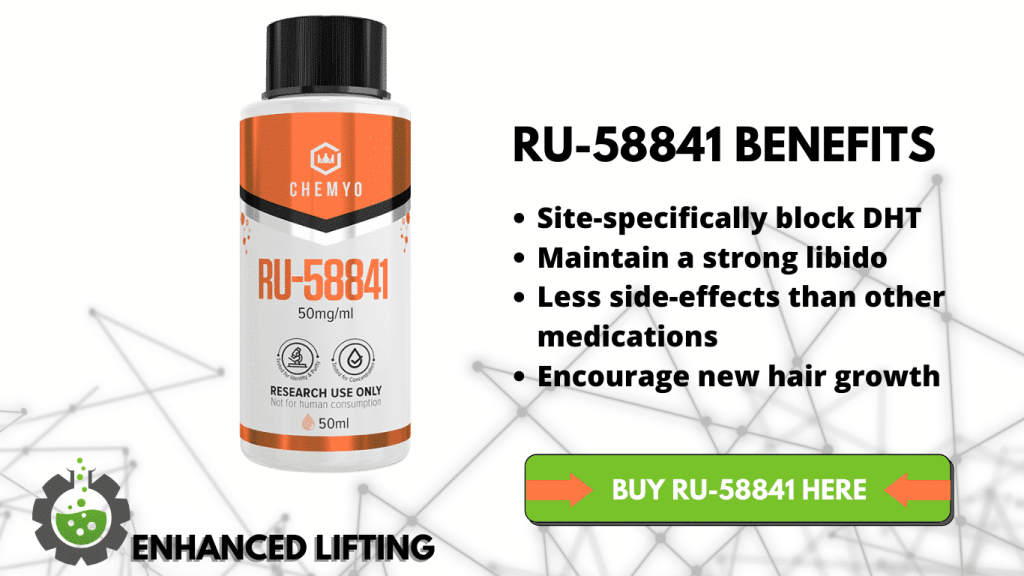 Blocking DHT at the hair follicle is RU-58841’s greatest benefit.

While many DHT Inhibitors like Finasteride or Dutasteride block DHT throughout the body, they can leave an impacting affect on mood and sexual function.

RU-58841 blocks DHT at the hair follicle and not throughout the body, which decreases its ability to be fully anti-androgenic and lower body DHT levels [R].

Since RU-58841 blocks receptors in the scalp, it can be effectively used to combat hair loss from DHT-derived steroids like Masteron, Winstrol and Proviron, as well as hair loss from SARMs like RAD-140, S-23 and YK-11.

The first purchase we would make in our hair loss treatment journey would be buying Chemyo RU-58841-it’s cheaper than most and almost twice the volume compared to other competitors.

Low DHT levels and 5 alpha-reductase inhibitors like Finasteride or Dutasteride can cause erectile dysfunction [R].

LESS SIDE-EFFECTS THAN OTHER TREATMENTS

If you had to choose RU-58841 versus Finasteride or RU-58841 versus Minoxidil, we’d say RU-58841 twice. Drugs like finasteride and minoxidil end up lowering your overall DHT levels, which can lead to gaining fat, losing muscle, and more.

RU-58841, however, works by only binding to the scalp, so it doesn’t actually decrease your DHT levels—it merely prevents the DHT in your body from binding to your hair follicles, and thus ends up preventing hair loss!

Studies have confirmed that RU-58841 is one of the most powerful hair loss prevention treatments to date, and that most men have overwhelmingly positive results with it [R].

The problem with most of these hair regrowth drugs is that they affect the DHT levels, testosterone levels, and other androgen levels through the entire body, rather than just on the scalp.

Fortunately, RU-58841 is site-specific and only works at the scalp where it’s applied.

Most men are better off buying some RU-58841 from Chemyo and applying it to their scalp once daily—not only is it more effective than most common hair loss treatments, but it also has far less side effects.

Be sure to check out our individual hair loss profiles for each hair loss medication to learn more about their benefits and side-effects, and to figure out what the safest way to use them is.

The accuracy of these reports with RU-58841 side-effects is difficult to determine. What’s more, many of these users will have been using other experimental treatments concurrently (Finasteride or Minoxidil), further muddying the waters.

We’ve done our best here to not only sum up possible side-effects you might encounter but why you may as well.

Anti-androgen therapy in general can cause a slew of different side-effects but we’ve heard these in reports and can find a basis for them.

Because they also stop oestrogen production, they may lead to headaches and osteoporosis [R].

Anti-androgen therapy can also lead to a few more serious side-effects including depression or loss of wellbeing, erectile dysfunction, and impotence [R].

We highly advise seeing a doctor before administering RU-58841 and definitely if changes in mood, sex drive, or ejaculation occur.

The best time to apply RU-58841 is right after a shower when the hair is clean and the sebum buildup on the scalp is minimal.

Apply one full dropper of the RU 58841 into your hair and onto your scalp. Rub it in, and make sure it all gets absorbed.

RU58841 is one of the best compounds for hair loss prevention because it acts quickly, binds to the scalp, and doesn’t have many side-effects.

Most men find that RU-58841 begins working within just a few weeks and drastically improves their hair loss, and in many cases, can even help reverse it. 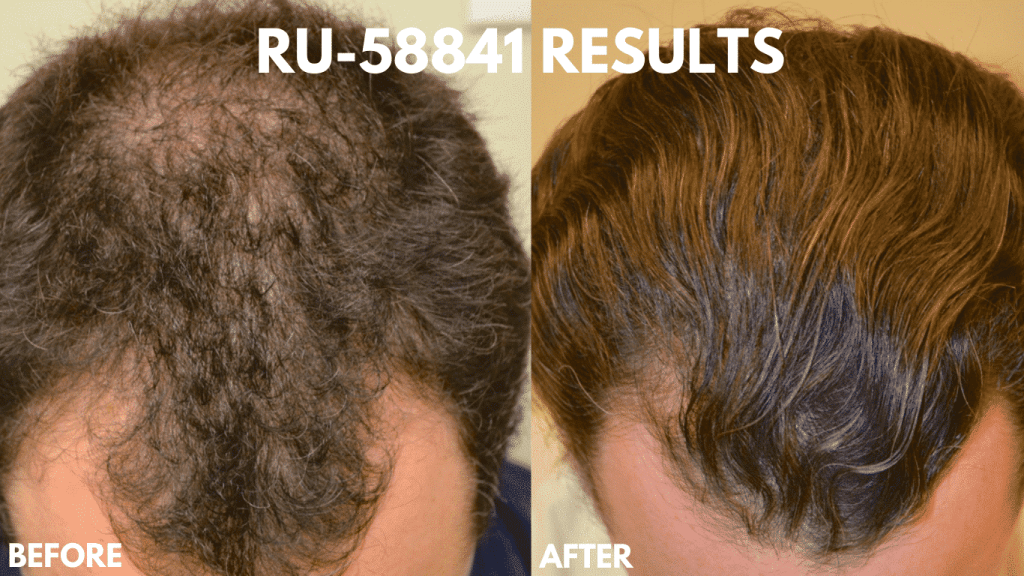 RU-58841 VS OTHER HAIR LOSS TREATMENTS

RU58841 is a far better topical treatment than Minoxidil.

Blood flow to the scalp and hair follicles decreases over time and these hair follicles become miniaturized as you grow older. This is a process known as androgenic alopecia, which most men experience as they grow older; this is what Minoxidil combats the best.

The core issue with hair loss, however, is DHT binding to the AR and also miniaturizing hair follicles, which Minoxidil doesn’t combat.

Standalone, Minoxidil is worse, however, it is very common for users to stack Minoxidil and RU-58841 together for great results.

A very popular DHT Inhibitor known as Finasteride has been approved for the treatment of hair loss but it has a HUGE amount of side effects compared to RU-58841.

The problem with most of these hair regrowth drugs is that they affect the body’s total DHT levels, testosterone levels, and other androgen levels rather than just focus on the scalp.

While drugs like Finasteride may be helpful with hair growth and hair loss prevention, they also have a higher chance of worsening libido, ejaculation volume, and causing sever depression.

RU-58841 is just a research chemical, not a prescription medication, so it can be purchased legally online but not for human consumption.

RU58841 is one of the best ways to prevent hair loss, and is easily applied to the scalp within minutes—so naturally, you probably want to know where to buy it. Here at Enhanced Lifting, we’ve got you covered.

This vendor has been around the longest and is one of the most widely trusted SARMs websites in 2022.

All of their products come in 50 ml (milliliter) bottles, which is a full 20 ml more than the industry standard of 30 ml—that’s a 66% increase in the value you’re getting with these products. 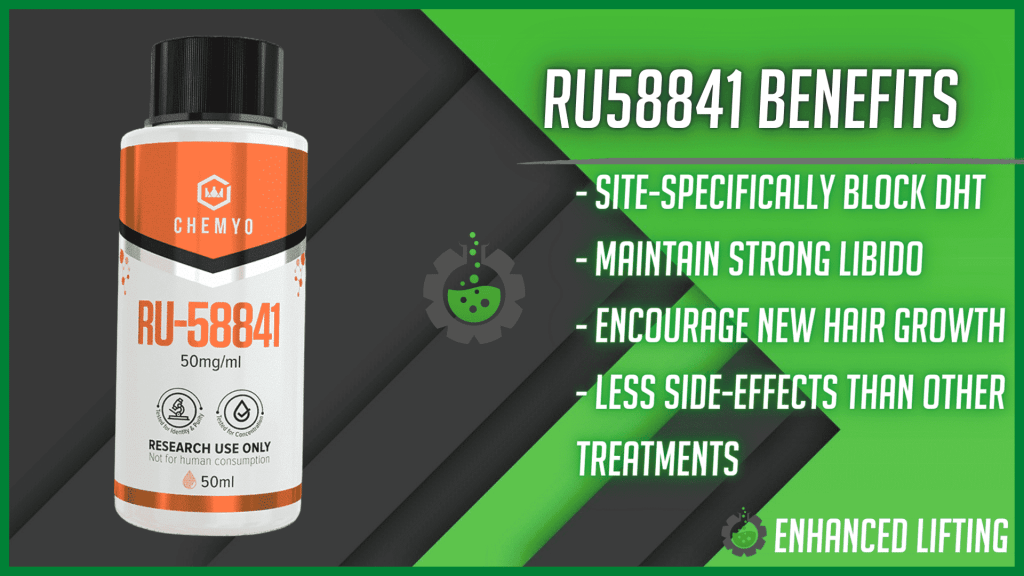 In conclusion, there are several hair loss treatments men and women can use to prevent further decay of hair follicles and encourage new hair growth.

RU58841 is by far one of the best hair loss treatments for men on the planet, due to its high rate of effectiveness, and minimal side effects.

To recap things, here are the best suppliers to buy hair loss treatments from in 2022:

If you do want to try some for yourself, we recommend you get it through a reputable vendor like Chemyo that guarantees 99%+ purity of products.

RU-58841 has changed the lives of thousands of men who suffered from male pattern baldness, so why wouldn’t you want to be next?

In a dry, room temperature space like a medicine cabinet.

All you do is apply one full dropper of the RU58841 into your hair and onto your scalp. Rub it in, and make sure it all gets absorbed.